Lawson Goens/Goins/Goings, Where are you?

There will be a lot of question’s, unknowns, and assumptions while you research your ancestors. One of the first things you can do is to write down all that you know about the ancestor along with public record information, such as land ownership, any links to specific events or activities, such as where someone might be employed, was it a skilled labor position like a blacksmith or boatman, and assumptions with dates and locations. Sometimes your assumptions can help ask enough questions to lead you on the right path of finding your mystery ancestor.

This article is a walk-through on Lawson Goens who was born free somewhere in 1807, in Virginia. Where in Virginia is it not known yet! His parents or siblings are unknown and it is unknown if he was actually born in Jefferson County, Virginia. (http://jeffctywvmuseum.org/). It is not known if Jason Goings, free Negro listed in the Jefferson County Personal Property Tax List for years of 1806-1840 on Shirley’s land are related, or the Joseph, George, Thomas, or Luke Goings, all “colored” in the same county are related. Lawson was married about 1830 to Sarah Hart who was born April 1, 1810 in Virginia. This is an assumption is since their first child was born in 1831, died in 1832. We do not have any information on the Hart family, except one of Lawson and Sarah’s granddaughters married Howard Hart of Jefferson County, yes they could be distant relatives.

The surname of Goens/Goings/Goins are in the census records of Jefferson County, Virginia from 1810 to 1860. To date there have been over 10 different spellings of the surname Goens, which will always present a challenge to your research. This family was located in District 28, Kabletown, Ripon, and Middleway areas of Jefferson County. Virginia, and as of April 1863 the county is now officially in West Virginia, and with surname findings through 1930.

Lawson Goins, found as head of household with his family in the Jefferson County, Virginia federal population census for the years of 1850 (Goings) and 1860 (Goins), only. In some censuses and other public records this family is listed as being white and other records they are identified as colored/mulatto/black. In the household of 1860, there was also Mary Hart and her three children (Phebe, Thomas and Benjamin). Assumption, she is sister-in-law to Sarah, Lawson Goens wife. The next question is what kind of work did Lawson do, was he a farmer or hired laborer?

Lawson Goens/Goins worked as a ferryman for 30 years in Jefferson Co. at the historic Shannondale Springs Resort. Lawson died on 12 July 1874. At the time we do not know where he died or where he is buried. (now the frustrations sets in and a lot more assumptions have arrived) How did we find out when Lawson died or what kind of work he did? While checking the local newspapers a reprint of Lawson’s obit appeared in 1944, in the Spirit of Jefferson newspaper. Now the question comes up, where is Lawson buried? Another assumption: a husband and wife would be buried next to each other. Lawson’s wife Sarah (Hart) died in 1886, we do not know what county she died in, but she was buried in Jefferson County West Virginia, because we have a photo of the headstone located in the cemetery in front of St. Pauls’s Church in Kearneysville, but now her headstone is now gone. There was a rumor that a car plowed into the cemetery several years ago and some headstones were lost. To date the death records have not been found in Virginia or West Virginia vital statistic records to document any findings. Another find-we were given a bible an in it was an 1856 flyer for the Shannondale Springs resort, allowing for the verification that Lawson indeed worked as a boatman for Shannondale Springs. (http://jeffersoncountyhlc.org/Hist of Shannondale Springs/index.html)

After Lawson died in 1874, wife Sarah moved in with her daughter Nancy Johnson, based on the findings in the 1880 census. According to Sarah (Hart) Goens’ bible, there is no S on the Surname, it is written as Goen. So where did that come from? This creates more questions and might have quashed a lot of assumptions. Goens is a popular Melungeon name as well. (http://www.melungeons.com/) Some researchers say this line of Goens links to Michael Gowen, born about 1635, the Negro servant to Christopher Stafford, in the York County Virginia area, which also links to Mihil Gowen.

So what’s next, what is the next logical step in determining who Lawson Goens is and where in Virginia did he come from-stay tune for the next write up on the Goens’ 11 children.  If you have any information, feel free to leave a comment. 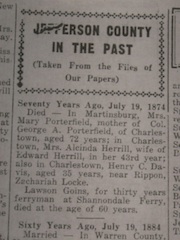 2 Responses to Lawson Goens/Goins/Goings, Where are you?

Finding time to research and write about my ancestors