Posted on January 12, 2018 by familytreegirl

Okay its week two of this wonderful adventure developed by Amy Johnson Crow; 52 Ancestors, 52 Weeks. It simply means I will do something each week revolving around my ancestors. Let me introduce you to Clara LaVina (Marsh) Davis. The Davis and Marsh families while living in Joyfield Township in Benzie, County, Michigan attended the Reorganized Church of the Latter Day Saints.

I really do not have any memories of her except my cousin Vanessa and I were combing her hair, while she sat quietly in a chair at her daughter’s house (Amyne’s house on James St., Grand Rapids, Michigan). I thought we were combing my aunt’s hair and my mother said, that was your great grandma! She was a church goer. Once she moved to the city of Grand Rapids she attended Rev. Julian’s Lutheran church. We don’t have many photos but this one is a favorite. This photo tells me this is a strong determine and very independent woman. Here’s a little bit of what I know about Clara, my maternal great grandmother. 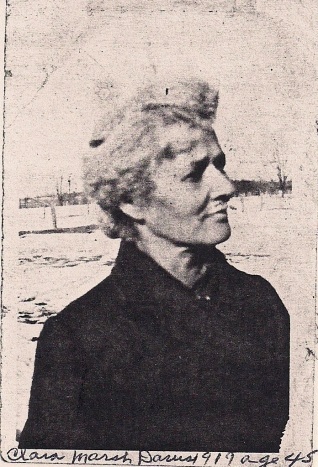 Clara is one of 12 children (six girls, six boys). Her Mother Mary Catherine was free born and her father, George W. was a former slave, farmer, and homesteaded 160 acres next to the Leonard Reed family from New York on Letteau Road, Pleasanton Township in Manistee County, Michigan. Thirty acres of the original 160 acres still remains in the family and the Reed family (a white family) are still next door. The Marsh and Reed family met on the trail and homesteaded next to each other. Clara’s mother Mary brought some apple seeds from Jefferson County, Virginia now West Virginia.

Here is a photo of Clara’s mother Mary Catherine (Goens/Goings) Marsh. We do not have a photo of George W. Marsh. Mary is pictured here with her granddaughter Mary Maniteau/Manitou.

A log cabin was the first house built and apparently it burned and another house was build near the road/path. It was close to something special with the area Native Indians. During the winter the Native Americans would pass by the house and rub up against the house. As I was growing up we spent our summers on the Marsh farm. The photo of the house since it has been restored. The house part on the left is the original house, you can see the chimney or something that splits the house and everything to the right was added by the current owners (my beautiful cousin Shelia is pictured in front of the house). The second photo is showing one of the fields of the Marsh House. 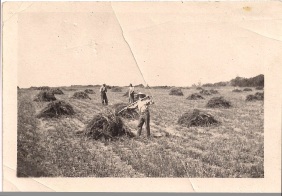 Clara left at the age of 16 with the David Hopkins family (A white family, which I find strange. I am not sure I would let my 16 year old daughter go to another state without me) and went to Dallas, Arkansas area. Mr. Hopkins was believed to operate a drug store. Clara had already passed the 8th grade, which was rare for the Arkansas area they were living in. People were shocked when they learned she could read and was educated. The local people did not want her to leave, they wanted her to stay and be the teacher. She for some reason knew she would when she bid her father goodbye that see would not her father again. She returned when she was 18 years when she received word from her mother that her father, passed 12 September 1892. Clara did a little bit of teaching while she was in Arkansas. Her job was to help the Hopkins wife with the kids. The Hopkins family had a daughter the same age as Clara. They liked to ride horses and had fun when riding to grab tree limbs and swing on them. One time the daughter, while they were riding yelled to Clara before she grabbed a tree limb, which actually was not a tree limb, it was a huge snake.

Another note on Clara, it is said that she was able to read tea leaves and loved to sew and never removed her basting threads on things that she sewed. This caused chuckles with the women in the family. She delivered her granddaughter Clara Eugene, my Aunt and also a neighbor lady’s baby, who named her baby LaVina, who was also albino baby. Per Clara’s granddaughter Verna, my mother, says “my grandma always seen the good in people and she always talked nice about everyone. She also identified people by seeing an animal in them when she looked in their face”. Now that is interesting!

Clara married 5 January 1896 in Benzie County, Michigan to Henry Allen Davis (born in Medina, Ohio, son of William and Mildred Ann (Brand) Davis. The Davis family was out of Chambersburg, Franklin County, Pennsylvania and was on route to Michigan after a five-year stay in Ohio. It is believed that William and Mildred were the first people of color to homestead in Benzie County. Henry was Clara’s brother in law, who was married to her sister Sarah Ann, who died in 1894, and had one child Randolph Davis.

Clara and Henry had five children (three girls and two boys). Clara and Henry also raised her nephew and her brother Warren Marsh’s two children Wes and Lester Marsh when their parents passed in 1910.

Here are some other photos to enjoy with my great grandmother Clara.

Clara with her two daughters Amyne on the L and Irene on the R.

Great Grandmother Clara and daughters Amyne on the L and Irene on the R. Date unknown but in the early 1920s.

Photo of Malcolm School in Manistee County. As you can see one of Clara’s sisters (Hattie) and her three young brothers. Clara is in Arkansas.

Henry and Clara (on right) and their children and family. First Car-Photo taken in the 1920s.

Know your roots, they are long and strong!

Finding time to research and write about my ancestors