Just because you have a Black friend…

Posted on March 1, 2019 by familytreegirl

does not mean you are not a racist or have racist tendencies! This write up is a little rant, so it’s up to you if you want to read it or not. The 2019 Black History month has not been a good one in my opinion. We should be learning, teaching generations, and sharing the contributions of African Americans.  I commend Carter G. Woodson for setting up the Black History Month. At least we have one month, and we see the that communities do get involved.  l love this time of the year and enjoy celebrating Black History 365 days per year. So much information is spreading via social media about lots of local history and heroes. It is exhausting with all the news, chaos, and lying going on in this country. I am turning off the TV and putting on PBS, American History TV on the weekends or pulling up Finding Your Roots with Dr. Henry Louis Gates or Who Do You Think You Are continually. Those shows keep my blood pressure down and are very calming.

Now I have say to White America…with all the statements of not knowing if something is offensive or not. Maybe it is just a good thing to just be quiet and stop doing whatever it is you are doing. I want to make it clear, you having Black friends or relatives does not mean you are not racist or have racist tendencies. I have Black friends too. I have White friends. But I am not running around in a KKK robe making fun of them. The Oxford dictionary provides this as a definition of racist “A person who shows or feels discrimination or prejudice against people of other races, or who believes that a particular race is superior to another”. I understand the definition clearly and know that we, as in African Americans were never the problem. 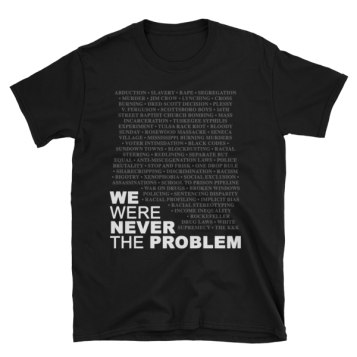 What really prompted me to write  this little piece because it was so frustrating to see that beautiful African American young lady put on display during the Cohen testimony. I do not care if she is a #45 supporter and employee or not. She was used! Just because you are hired and have a job and your boss says hello, does not mean he or she likes you. It does not mean that individual is not a racist or have racist tendencies.  America sees color first, the individual second. Since 1950’s I have seen this myself. It was an awful display of what is wrong with our country. We seen it through the 2016 campaign. Please understand that you can still be racist  and not like someone because of the color of their skin and have grand babies that are biracial, mixed, or Black, etc. My view is racists say things, they do things, it’s an action not just a thought that has impacts. Those actions do not care how many African American friends you have, or if you dated a person of color or what religion you practice. The ugly practices were so common, some still are common and expected and that is one reason you are in denial and not seeing what is offensive to others.

Now put yourself in my shoes or any person of color shoes. Think about the mocking, bullying, and intimidating that goes on, include the name calling, separations, and avoidances, that are placed on people of color.  I just can’t take the “I didn’t know” responses anymore. It is not believable in 2019. Get to know some people of color, you can always ask questions if you are not sure if something is offensive or not. This has been going on too long for folks not to be aware of what offends others. I say, you know what you are doing and don’t expect to get caught. It’s 2019 please stop using your Black friends or workers to show you are not something that you might not be. We see it, we feel it. It is not only offensive, it is hurtful.  Think before you dress up and mock anyone for anything. Try living by the rule of “Do no harm”.

Disclosure: Yes, the t-shirt is designed and sold by my son. I am wearing one of mine tomorrow.

6 Responses to Just because you have a Black friend…

The Untold story of an American Hero

Musings on My Tri-racial Black and Puerto Rican Ancestry.

“There are two lasting bequests we can give our children: One is roots, the other is wings.” Teaching children values and giving them the opportunity to excel is essential to good parenting. However, I feel I must also provide my children (and myself) insight into the ones who came before us: our ancestors whose lives and stories have shaped us into who we are. This is my journey; these are their stories…